The Majestic Property lies along the regionally significant and prospective Coquihalla gold belt in southern BC, and includes historical samples collected from quartz veins that returned 216 grams per tonne gold.

The property is located 40 km north of Hope, BC along the Trans-Canada Highway, and was recently acquired by Hive. The property lies within the Coquihalla gold belt (CGB) in the northern Cascade mountains. The CGB is a northwest trending gold-bearing corridor that follows the strike of the regional Hozameen Fault which extends 28 km. In the 1850s prospectors made discoveries along the Fraser River, and since then the region has become home to approximately 25 mineral occurrences, as well as several mines including the Carolin Mine which produced 45,000 oz of gold in two years. Hive’s expanded Majestic property includes the historical Majestic showing (MinFile #: 092HNW033) within the eastern half of the claim, as well as claims on prospective ground to the west. Geology noted along the Hozameen fault within the Hive claims are generally fine-grained sediments and mafic to intermediate volcanics and volcaniclastics, with a lesser component of mafic and ultramafic variably serpentinized intrusives and volcanics. Various rock types are host to and cross-cut by gold-bearing quartz veins. 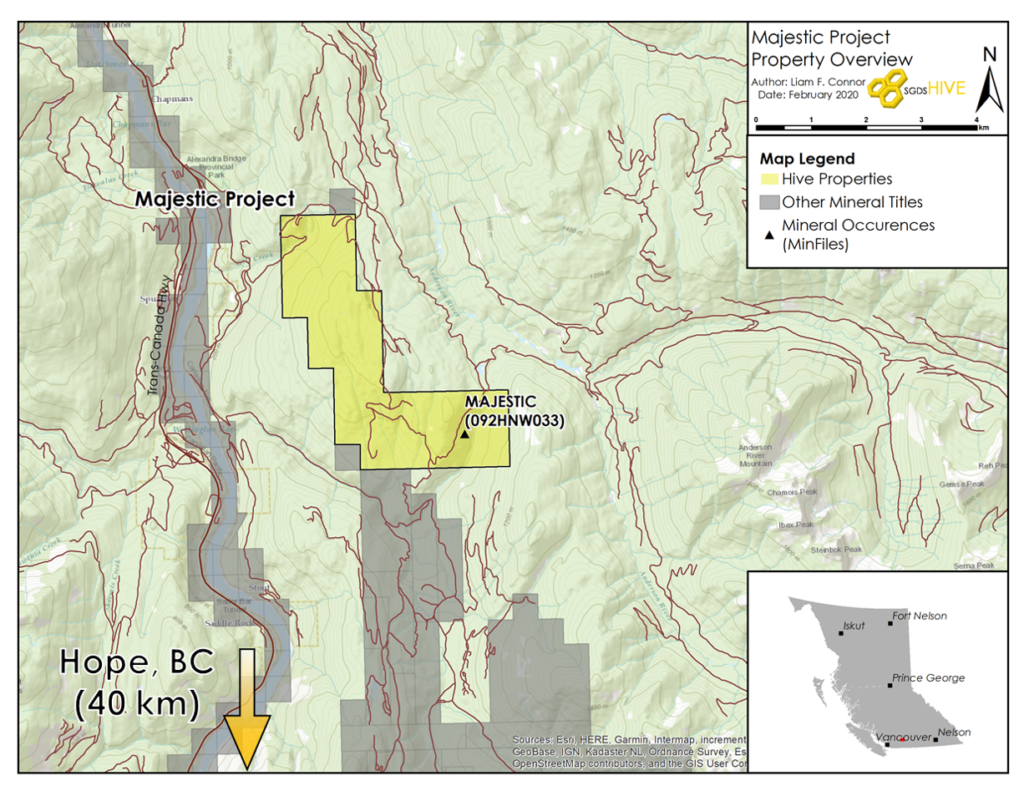 The Majestic claim lies within the Coquihalla Gold Belt (CGB), a regional-scale gold trend associated with the Hozameen Fault. The Hozameen Fault strikes NW-SE and dips to the east. Typically locate along the Hozameen fault within the CGB are greenstones, serpentinzed mafic and ultramafic rocks, which are often host to gold mineralization.

The property is located along the Trans-Canada Highway and is approximately 30 minutes from Hope, BC. Access across the property is good and well serviced by trails and forestry roads.

Gold in the Coquihalla Gold Belt (CGB) was recognized in the 1850s by prospectors working along the Fraser River Canyon. The Majestic mineral occurrence (MinFile #: 092HNW033) was discovered in 1935. The host quartz vein was exposed in the Upper No. 1 Tunnel and assays ran 215 g/t gold. Many auriferous quartz veins have been noted cross-cutting various lithologies, predominantly sediments and volcaniclastics, in subsequent years of exploration work.

Additionally, historical anomalous (> 35 ppb) gold values on and around the current Hive Majestic claims were returned from several phases of soil sampling during exploration programs in the 1970s and 80s.

The Majestic mineral occurrence (MinFile#: 092HNW033) was first recognized in 1935. The showing is of anastomosing quartz veinlets and stringers that were observed to cut the dyke and a up to 2 cm-wide quartz vein hosting finely disseminated pyrite and tetradymite. This quartz vein was also noted to carry visible gold. When sampled, the 2 cm-wide quartz vein ran 216 g/t gold. Historical development consisted of two tunnels, 70 and 9 metres long, respectively.

The Majestic claim follows the Hozameen fault and associated geology. The Hozameen fault is the known primary structural control on the Coquihalla Gold Belt (CGB). The CGB is host to mined gold occurrences, including the Carolin Mine which produced 45,000 oz of gold.

The Hive exploration plan for the Majestic property will begin with locating the old adits, tunnels, and other historical workings within the claims. The initial focus will be the Upper No. 1 Tunnel which intersected a quartz vein that assayed at 215 g/t gold. Hive will also complete a property-wide geological investigation including mapping and rock sampling, for a refreshed take on the style and extent of mineralization, and host rock characteristics to better qualify the nature of the gold-bearing system. The importance of the Hozameen fault and its related structures, cross-cutting faults, and its spatial and geological evolution relating to the CGB will be investigated by performing structural mapping and analysis.

The aim of these exploration plans is to develop a deeper understanding of the lithology and structural geology, identify new mineralized targets on the property, and present a deposit model for the Majestic showing and new discoveries, and howthose relate to the Coquihalla Gold Belt.

The Majestic Project lies with the Traditional Territory of the Nlaka’pamux First Nation, which covers an area from Cache Creek in the north to northern Washington State in the south. Majestic is closest to the town of Shpupz-m (Spuzzum).

We are currently working to build relationships with the Nlaka’pamux First Nations and to understand and embrace the traditional use of their lands, as well as providing mutual opportunities.